On May 7th young people, volunteers and staff from the LOFT Youth Project joined Cycle Against Suicide for the Donegal leg of their 1400 circuit of Ireland.  Cycle Against Suicide aims to spread a key message, “it’s ok not to feel ok, and it’s absolutely ok to ask for help” throughout the island of Ireland.   The objectives of Cycle Against Suicide are to break the stigma associated with the open discussion of mental health and to raise awareness of the considerable help and supports that are available for anyone battling depression, self-harm, at risk of suicide or those bereaved by suicide.

Donegal Youth Service (DYS) became involved in the project through the Cycle Against Suicide Student Leaders Congress held in January 2014.  Since then, young people in DYS have hosted mental health awareness events, undertaken training in mental health awareness, participated in wellness week activities as well as trained for the Cycle.

Donegal bike hire company, Grassroutes, generously sponsored the transport of bikes for the groups as well as providing bike hire free of charge to the group members who did not have their own bike.  The group would like to sincerely thank Dermot and all the team at Grassroutes for their support. 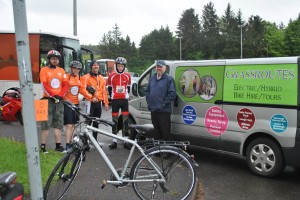 While the Cycle started off to great applause from the community of Donegal Town, the day was to be marked with tragedy and sadly marshal Brenawn O’Connell lost his life in an accident while shepherding the cycle from Donegal to Ballybofey.  The cycle was cancelled for two days, but continued at the request of the O’Connell family.  Donegal Youth Service would like to extend sincere condolences to all who mourn Brenawn’s passing.

Although the bikes have now crossed the finish line in the Phoenix Park, the journey of Cycle Against Suicide will continue until the message “it’s ok not to feel ok, and it’s absolutely ok to ask for help” has spread throughout Ireland. Group participant Matthew Dougan reflected on the inspiration he took from Fionnbar Walsh’s speech at the Student Leaders’ Congress “as cheesy as it sounds, thanks to my trip to Dublin in January with DYS to the Cycle Against Suicide student conference and my participation in a leg of the Cycle in May, my life has changed, I am regularly training at the gym now and a lot healthier due to my preparation for the cycle”.

Donegal Youth Service is a countywide youth service with over 30 affiliated youth clubs and projects that provide drop-in facilities, programmes and services to over 5000 young people across Donegal.  Donegal Youth Service is honoured to have become a member of the Cycle Against Suicide family and hopes to become an ambassador group in the coming weeks.