Recruitment is already underway for the 8th Donegal Youth Council, with the elections taking place in October.  As the current Donegal Youth Council are reaching the end of a very successful term (2014 – 2016) we caught up with a few of them to find out what inspired them, their best moments, and what advice they have for the upcoming Donegal Youth Councillors. This time we have Megan Skinnader, Loreto Letterkenny Representative and National Executive representative.  Here’s what she had to say…

Megan Skinnader receiving a Certificate of Achievement from the Mayor of Donegal County Council Terence Slowey for her role as a representative on Donegal Youth Council.

What was your role within the Youth Council?

In the second year of my term on the Youth Council I was elected onto the Comhairle na nÓg National Executive*. This was an enormous honour for me. So now my role is to continue on this executive and act as a county representative, and to voice the needs of all young people across Donegal on a national body.

Being from the Letterkenny region I think an important role for us was to be on call. Living in the largest urban area in Donegal meant a lot of meetings and events were often happening locally for us so if our co-ordinator needed someone it was important for us to attend but also to be attentive and show our genuine interest for last minute requests.

Did something inspire you to run for the Youth Council/why were you interested in running?

From a young age I was always interested in local issues and current affairs. Being connected to the community is something extremely important to me. I often noticed issues for young people across Donegal and when the opportunity of joining the Donegal Youth Council arose I knew it was an opportunity I couldn’t miss.

What are you most proud of achieving during the 2 years you were a Youth Councillor, and why?

Being a youth councillor has felt like a series of proud moments. I was surrounded by so many like-minded, hard working young people who enabled the youth council to have an incredibly successful term. Seeing Initiatives like Shake up Sports (gives each participant an opportunity to learn more about the importance of sport, with the emphasis on fun and activity rather than competition), Connecting for Life (Donegal Suicide Intervention Plan) and the Young Carers video come to life and make actual change gave me so much pride.

What was the most memorable moment for you?

Our YEP trip to Norway was unforgettable. I still look back at the pictures a couple months later in awe at how amazing the trip was. The whole experience of youth council has been phenomenal. 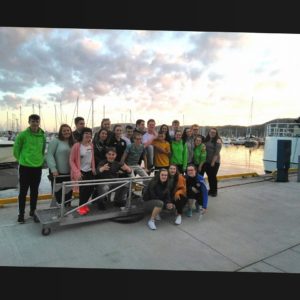 What are you doing now?

Right now after Transition Year I’m settling slowly back into work for fifth year, although it isn’t easy! I’m so happy I had the time in Transition Year to have full commitment and focus on the youth council for our final year.

What advice would you give/what would you like to say to all of the upcoming Youth Councillors?

All I can say is that the Youth Council will be one of your most exceptional experiences. My experience of the youth council has been anything but boring. For me it was somewhere I made lifelong friends, made fond memories and had a platform to voice opinions and issues of young people. I think an important aspect of the youth council is reinforcing a sense of community. Meeting with different community groups where issues were highlighted and diversity was a priority was something enlightening. I think something that makes the youth council so successful is the passion from each member.

As teenagers what we lack in experience is made up in zeal and enthusiasm. The youth council plays an integral and important role in Donegal and I am confident the next youth council will bring the same keenness and dynamism. The experience gave me a bigger appetite for making change and I know the the skills and political adroitness I’ve learned over my two year term are attributes I can carry with me for life.

*One representative from each of the 31 Youth Councils is elected to the Comhairle na nÓg National Executive, which follows up on the recommendations from Dáil na nÓg to make changes for young people in those areas. The National Executive has a term of office of two years and meets once a month. The National Executive is facilitated and supported by the Department of Children and Youth Affairs , Foróige and Youth Work Ireland, who ensure that they get the opportunity to engage with appropriate Ministers, policy-makers, Oireachtas Committees and other decision-makers.

Information election packs are available by contacting the Donegal Youth Council on their official www.facebook.com/donegalyouthcouncil or by emailing youthcouncil@donegalyouthservice.ie. Youth Council Co-ordinator Carlyn Maguire can also be contacted at 074-9129630