The Young People of BreakOut Speak Out

BreakOut is the programme for LGBTI young people, their friends and allies at Donegal Youth Service. In February BreakOut received National Accreditation from Belong To for the second time during its 11 years in operation throughout the county.

Four young people spoke about their experience as part of BreakOut at the Accreditation event, and here’s what they had to say:

“I started going to BreakOut as it was recommended to me by friends and a teacher. And I’m so glad I did as it has had an amazing impact on my life. I feel accepted every time I’m there. It’s made me feel more confident and proud of who I am, and to not hide away. It has also helped me stand up to school bullies. It’s very important to have a place like BreakOut as it gives young people from the LGBT+ community and friends of the LGBT+ community a chance to feel safe and meet others. It also allows people to learn more about the LGBT+ community. Before I joined BreakOut, I knew some things but every week I learn something new about different sexualities and gender identities. If there wasn’t anywhere like BreakOut it would be a lot harder for young people to come out to their friends or family and it wouldn’t give people a chance to be who they want to be.”

“Joining BreakOut was probably one of the best decisions I’ve ever made. I didn’t have a good school experience, so BreakOut became an escape for me. It was a safe space for me to go to when I had nowhere else. I’ve met amazing inspiring people and made some of the best friends I could ever ask for. Since joining BreakOut, I have gained a lot of confidence.Getting up and doing a speech is something that was previously unimaginable. It’s been an honour to be part of BreakOut over the years.”

“I joined BreakOut after being brought by a good friend of mine. Now I always look forward to seeing my friends here at the weekend although they are more like a family than friends. If I’ve had a bad day or week, they are always there to comfort and listen to me, I couldn’t ask for anything more. BreakOut has helped me realise that it’s ok to be me.It’s made me feel so much more comfortable with who I am. It had become a sanctuary for me and many other people. When I first came to BreakOut, I was recovering from being in a really bad place, it has helped me during that process. Being here has helped me grow, open up and reach out for help from others. It is without argue the best thing that’s ever happened to me.”

“I decided to join BreakOut because somebody came out to me. I joined to support them and to educate myself. The BreakOut family is my favourite part of it. Everyone gets on and is accepting of others. I remember being so scared to tell everyone I was an ally, but everyone made me feel so loved and appreciated. I remember the weight being lighted off my shoulders. It was essentially the tables turned. I was the minority wanting nothing more than to be accepted. It gave me great insight on just how difficult coming out is. I’ve also become more confident because of BreakOut. It has helped me find my voice which I use to fight homophobia, transphobia, biphobia and any other types of discrimination in my school.”

“It has been my pleasure to first be a young person within the group to now being the group’s youth worker. It is an honour to watch the young people grow from being shy and nervous to confident and outgoing.The young people inspire me with how brave they are and how much they are positively changing Donegal for future LGBTI+ generations to come.

While we have made many strides for equality in Ireland and Donegal the LGBTI+ community still faces discrimination, as was highlighted in Belong To’s recent School Climate Survey, 2019. With young people speaking of their fear of coming out, being bullied and not being accepted by family and friends, the BreakOut group offers them a safe space to be themselves and to receive support from their peers. It is somewhere to relax and express themselves in a world that isn’t always accepting.

We also offer a one to one listening ear service for young people who are struggling with their sexuality and/or gender identity yet feel uncomfortable with a group setting. They can still get the support they deserve and need.

BreakOut has changed the lives of so many young people, their friends, family and communities and will continue to do so for many years to come.” 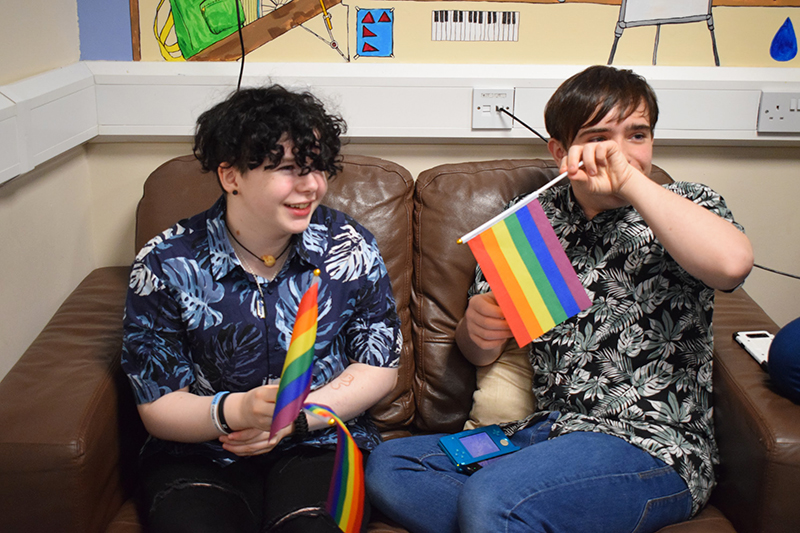 For more information about BreakOut, please contact Donegal Youth Service on 074 91 29630, or email karen.conlon@donegalyouthservice.ie. There are two BreakOut groups in Letterkenny which support young people aged 12-30, there is also a BreakOut group operating in Glenties. Remember you don’t have to be ‘out’ to attend BreakOut.